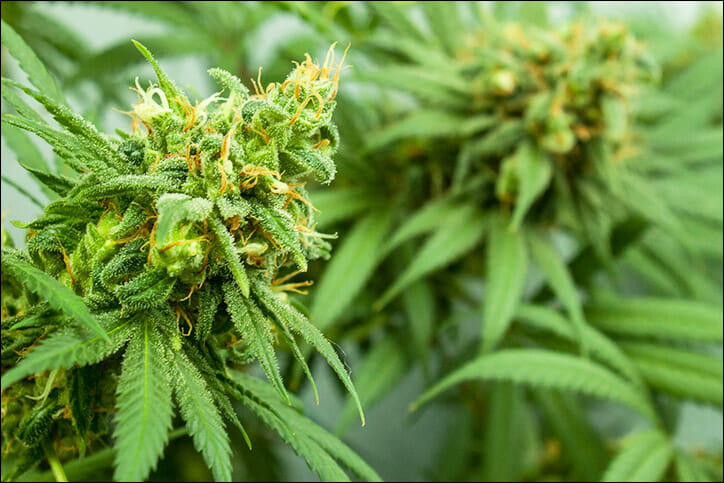 Cannabinoid Hyperemesis Syndrome or CHS is a form of weed sickness that has been increasing as more and more people smoke marijuana due to states lifting restrictions on its use.

While many states allow for some form of legal use, either medicinal or recreational, marijuana is the most used federal illegal drug in the United States, according to the Centers for Disease Control and Prevention.

One common misconception about marijuana is that it’s completely harmless. It’s true it has shown some positive health benefits for certain conditions, and some consider it one of the best opioid alternatives for pain that is less addictive than other drugs.

But users should be aware that marijuana could still cause negative problems for some individuals depending on his or her usage.

Aside from issues of abuse, dependency, and addiction, cannabinoid hyperemesis syndrome is a very real condition that can have debilitating symptoms, especially among long-term marijuana users.

What is Cannabinoid Hyperemesis Syndrome?

Though it is rare, cannabinoid hyperemesis syndrome is a condition that leads to severe and repeated bouts of vomiting in long-term, daily marijuana users. CHS is one of the negative side effects of marijuana users may encounter from smoking weed.

The condition is sometimes called Cannabis Hyperemesis Syndrome and the symptoms appear as a type of weed sickness that users usually experience early in the morning after waking up and getting high.

Tetrahydrocannibinol (THC) is the primary psychoactive ingredient in marijuana. THC is what binds to molecules in the brain to produce the “high” that users experience. There are, however, molecules in the digestive tract that also bond to THC.

Regular marijuana use can actually cause changes in the digestive system, as well as the esophageal sphincter, the tight band of tissue and muscles that open to let food into the stomach.

Over time, daily pot use can alter the molecules in the digestive tract that lead to nausea and vomiting, which are the most symptoms of cannabinoid hyperemesis syndrome. 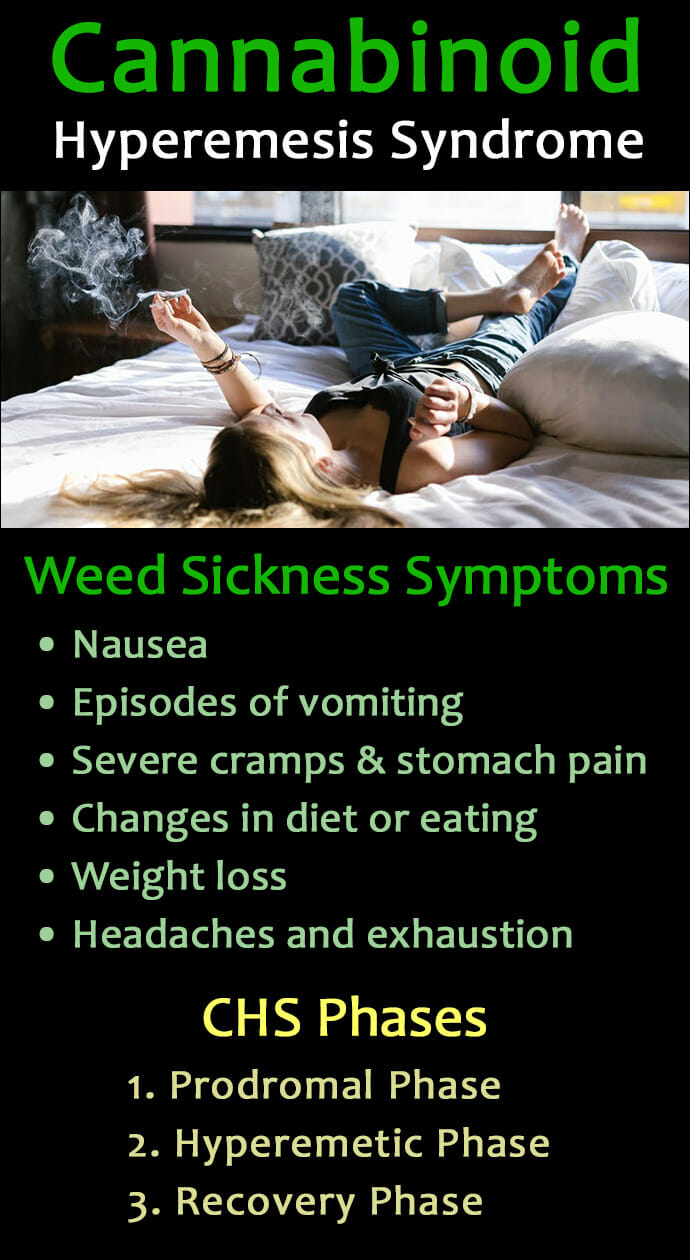 As mentioned, two of the primary symptoms of cannabinoid hyperemesis syndrome are nausea and repeated bouts of severe vomiting.

There are also different phases of the condition that can bring more nuanced health issues as it progresses.

Understanding the phases of cannabis hyperemesis syndrome is important for recognizing the condition and getting the proper help.

The Prodromal Phase is the very beginning signs of symptoms that may start with morning sickness, feeling nauseated, having stomach cramps or pain, and maybe some vomiting.

In the prodromal period, symptoms may even ease up slightly to allow a person to maintain normal eating habits. In most cases, he or she will probably continue using cannabis because they are unaware they are in fact experiencing weed sickness.

Even more problematic is that people tend to think marijuana helps with symptoms of nausea. As a result, they may smoke it first thing in the morning in hopes of easing the nausea, not realizing they are in the beginning stage of cannabis hyperemesis syndrome.

The prodromal phase of CHS can last for months and even years.

In the Hyperemetic Phase of cannabinoid hyperemesis syndrome, the condition has advanced. This phase leads to more serious symptoms that can be difficult to diagnosis if a person ignores them, is not honest with their physician, or if their doctor isn’t familiar with the condition itself.

Symptoms of the hyperemetic phase can include:

One strange sounding, though telltale sign that a person is struggling with cannabinoid hyperemesis syndrome is compulsively taking an inordinate amount of hot showers.

Hot water affects the hypothalamus, a part of the brain that regulates body temperature and vomiting. So, warm to hot showers actually help ease the weed sickness symptoms caused by CHS.

This is where an all too common pattern can develop: marijuana users wake up, feel sick, and smoke, thinking it will help with the nausea. Then they take a hot shower and feel a little bit better as they start the day.

Unfortunately, they may not realize that it’s the hot shower water that eased their symptoms and NOT the marijuana. In fact, smoking weed every morning actually makes the condition worse.

Living with the hyperemetic phase of CHS is incredibly unhealthy over the long-term. It can lead to heart troubles, kidney failure, swelling in the brain, and seizures.

As the name suggests, the Recovery Phase of Cannabinoid Hyperemesis Syndrome is when the symptoms of CHS go away because a person has stopped using marijuana.

People who have developed cannabis hyperemesis syndrome are generally unable to go back to marijuana use without getting sick all over again. 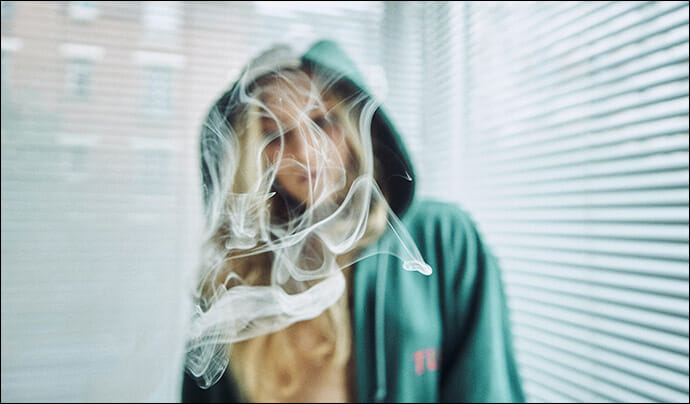 How is Cannabinoid Hyperemesis Syndrome Diagnosed?

Cannabinoid Hyperemesis Syndrome can usually be diagnosed by a physician who is familiar with the condition. A physical examination, along with an honest discussion about the symptoms and marijuana use, including frequency and duration, will be required.

Because chronic vomiting can signal a number of health related issues, blood work and other tests will likely also be prescribed.

Unfortunately, cannabis hyperemesis syndrome is a relatively new condition and not all doctors are aware of its existence, and this may be especially true in parts of the country where marijuana use is strictly prohibited.

For anyone experiencing the primary symptoms of nausea, vomiting, stomach cramps, and excessive hot showers for relief, it’s important to see a specialist, like a gastroenterologist or addictionologist.

The best cannabinoid hyperemesis syndrome cure is to stop using marijuana, though that might be easier said than done for some people struggling with a marijuana use disorder.

First and foremost, physicians will need to treat the immediate symptoms of cannabinoid hyperemesis syndrome.

Treatment for Cannabinoid Hyperemesis Syndrome can include some of the following:

After stopping the use of marijuana, some people will find relief very quickly, while others may have symptoms of cannabinoid hyperemesis syndrome for up to 10 days or so.

It’s not uncommon for certain CHS symptoms to persist for several months and these may be related to marijuana withdrawal instead of CHS for those with dependence.

Some people may need to undergo addiction treatment for marijuana use disorder in order to give up weed use all together if they are a long-term user.