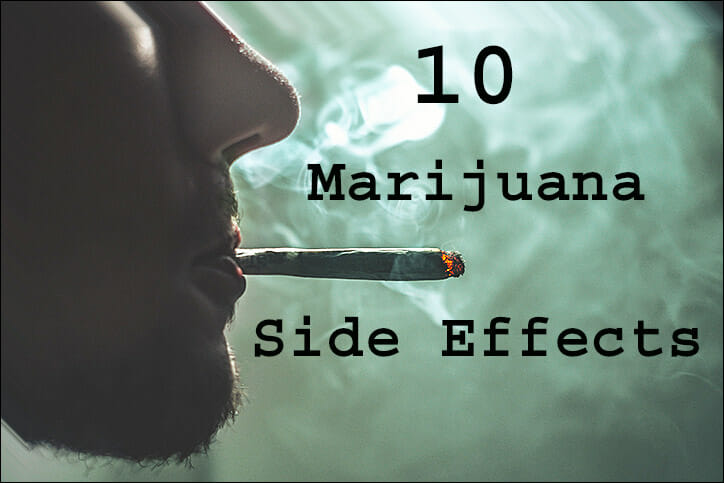 The concern about the positive or negative weed side effects of marijuana use has been a hotly debated topic for years, and it doesn’t appear it will be slowing down any time soon.

These days though, the discussion about whether or not cannabis use is harmless takes a backseat to the growing number of states that have legalized it.

As of January 2022, counting the District of Columbia and Guam, 20 states have legalized the sale of recreational marijuana, according to US News, with only four remaining holdout states outlawing the plant-based drug outright.

Does that mean marijuana use is completely harmless?

Is Marijuana Use Safe?

Now that state governments see how much money can be made from taxing and regulating recreational marijuana, the trend toward legalization is likely to continue.

The federal government’s classification of cannabis remains a schedule I narcotic, meaning a substance with no currently accepted medical use and a high potential for abuse. This view may seem antiquated to areas of the country hoping to become Amsterdam-like tourist hotspots.

In fact, the federal government’s stance that cannabis is illegal has made it difficult for universities or other scientific outlets to conduct large-scale studies to gather data about weed side effects and whether or not marijuana is a relatively safe medicinal or recreational drug.

CDC statistics show pot is the most commonly used federally illegal drug in the country. National surveys report nearly 50 million people use marijuana at least once in a given year.

While the prevailing wisdom might be that marijuana is harmless, regular and especially long-term use is known to come with a range of negative side effects of weed. 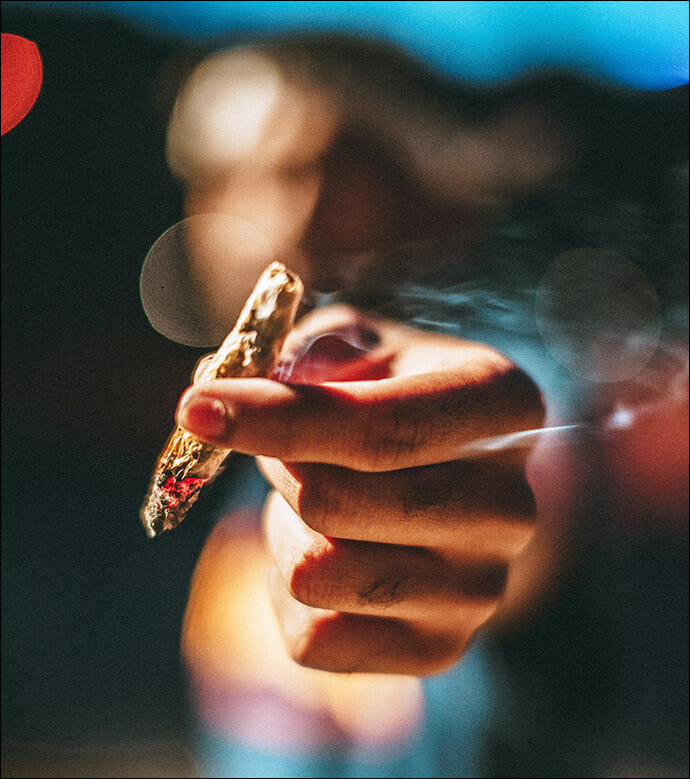 What are the Negative Marijuana Side Effects of Weed?

It’s important to understand that modern strains of marijuana are much more powerful than strains that were grown in the wild decades ago.

Infused products like cannabis vape concentrates, edibles, resins, or brittle-like substances known as “shatter” or “crumble” can have incredibly high levels of THC, the primary psychoactive ingredient in marijuana.

In addition, every person discovers or uses marijuana in different ways, at different ages, and with varying tolerance levels. This means that each person is likely to have very different reactions and perceptions of the drug.

There is still a long way to go with performing proper and accurate research before we truly understand all of the positive benefits and negative side effects of marijuana.

For now, we have to rely on the current data and knowledge that has been passed on from users and the medical community.

Here are 10 Negative Side Effects of Marijuana and Smoking Pot

There’s evidence that smoking or ingesting marijuana as a teenager or young adult, before the brain is fully developed around the age of 25, can have negative implications on brain development.

One brain imaging study found irregularities in the prefrontal cortex, an area of the brain involved in decision-making, among teens that smoked pot.

While this area of the brain naturally thins with age, the study showed this area was thinner in teens that smoked weed and could have a lasting impact as they become adults.

The idea that pot affects the teen brain into adulthood is one of the more alarming side effects of marijuana. Without saying that people shouldn’t smoke weed at all, it should be strongly recommended that teens and young adults abstain until a later age.

According to the Mayo Clinic, research suggests that marijuana users are diagnosed with depression more often than those who do not use the drug.

While there’s no clear evidence that marijuana directly causes the depression, the mental health condition and the drug statistically accompany one another more often than might be expected.

It’s also common for people who already have depression to use marijuana as a way to cope with the symptoms. It can actually help in the beginning, but over time, depression often returns and it can become worse than before a person started using marijuana.

Related: Is it Safe to Use Lexapro and Weed Together?

THC, particularly potent levels of the psychoactive substance, can actually increase a person’s anxiety, despite marijuana’s reputation for soothing and relaxing people.

Those with pre-existing anxiety disorders are at an even greater risk for weed-induced anxiety and should avoid using cannabis.

On the flipside, those who might use marijuana to ease their anxiety tend to find, after extended pot use, that their levels of anxiety increase when they’re not using cannabis. This can lead to an unhealthy and damaging dependence to the substance. 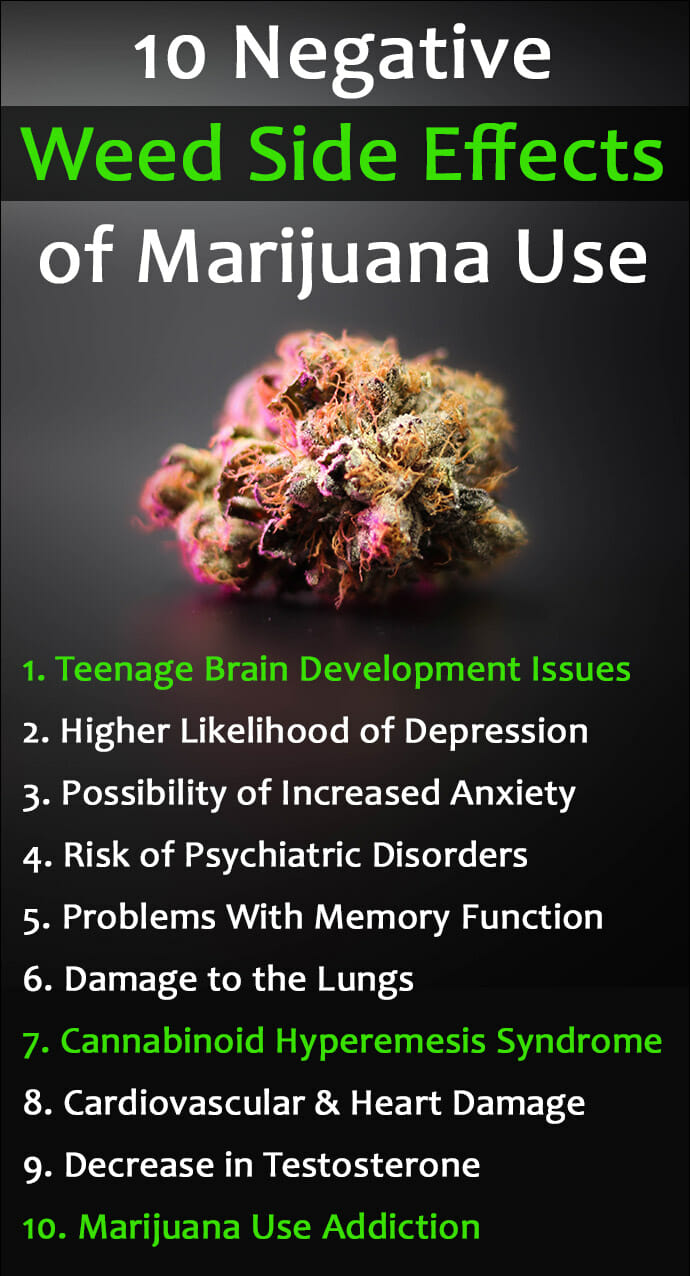 This does not necessarily mean that using cannabis causes schizophrenia or paranoia in a majority of users.

However, research shows a fivefold increase in the chances of developing some form of psychosis in users that ingest high-potency marijuana on a daily basis.

Those with a family history of psychosis, schizophrenia, or otherwise, are encouraged to avoid cannabis because THC may trigger chemical changes in the brain that can lead to mental health problems.

5. Problems With Memory and Cognitive Function

Weed’s primary psychoactive ingredient, THC, attaches itself to cannabinoid receptors and areas of the brain like the hippocampus, amygdala, and cerebral cortex that are associated with memory.

That is why marijuana users tend to suffer with short-term impairment of psychomotor function, or physical functions that require conscious thought to perform, like driving. The drug also affects a person’s working memory and executive functions in the short-term.

Though the research is sparse, some experts suggest that the side effects of marijuana on short-term memory will only worsen and continue with long-term, regular use.

6. Damage to the Lungs From Smoking Marijuana

It’s almost a no-brainer that one of the negative side effects of weed when smoked is the harm it may do to the lungs.

Though not as harmful as tobacco, the cannabis flower and stem do contain carcinogens, which combined with heat and smoke can damage the fragile tissue of the airways in the lungs.

The American Lung Association has called for more research on the effects of smoking weed on the lungs. It also adds that regularly smoking marijuana can lead to chronic bronchitis and cause immune-comprised individuals to be at greater risk of lung infections.

Though Cannabinoid Hyperemesis Syndrome (CHS) is still considered rare, it is very real, very unpleasant, and the number of people who experience it is growing.

Beyond having an impact on the brain’s chemistry, THC can also lead to changes in the digestive tract and stomach, especially in people who eat or smoke marijuana on a daily basis for years at a time.

The condition can cause nausea, vomiting, dehydration, and abdominal cramps.

What’s particularly problematic with CHS is that many people will use marijuana in an attempt to treat the very symptoms the drug is causing, which only make the symptoms worse or prolongs them.

Research has shown that people with existing heart disease often develop chest pains when under stress faster if they have been smoking weed than if they weren’t.

The side effects of weed and cannabinoids are known to raise heart rates, dilate blood vessels, and make the heart pump harder.

This also means that the risk of heart attack for at-risk users is several times higher in the hour after smoking marijuana than it would be normally, according to an article published in Harvard Health.

The particularly potent strains of modern cannabis, which can contain extremely high levels of THC, are known to actually slow down the body’s production of testosterone.

10. Marijuana Use Disorder and Addiction

According to the Centers for Disease Control and Prevention, an estimated 3 in 10 people who use cannabis have a marijuana use disorder, meaning they continue to use the substance despite the negative side effects of weed that result from the continued behavior.

While not everyone develops dependency and addiction issues, the CDC reports that around 10% of users have the likelihood of becoming addicted to marijuana.

Not All Side Effects of Pot Use are Bad

As mentioned previously, because marijuana is still considered illegal at the federal level in the United States, it’s difficult to thoroughly research it.

The cannabis plant is made up of hundreds of unique cannabinoids and new ones are still being identified.

THC is the active ingredient that gets users high, but the plant also produces CBD that doesn’t produce any psychoactive effects, and this compound is thought to have the most beneficial properties.

Many people in the medical community already agree there are some known health benefits and positive side effects of marijuana. This is why it has been legalized for medical use in many states.

It is known to be an effective treatment for many types of pain and the FDA approved “Cannabidiol” in 2018 for the treatment of certain forms of epilepsy.

Many cancer patients have found positive side effects of weed during chemotherapy and other types of treatment.

A short list of marijuana benefits for some people includes:

It’s important for everyone to take note of the positive and negative side effects of marijuana with the understanding that there’s a time and place for everything.

Marijuana may help some people for certain conditions or it may be detrimental to others. Being aware of the possible negative side effects of weed can help people who chose to smoke or eat it to use it more responsibly.

Most people agree it can cause harm to the developing teenage brain, so it is best for teens and young adults to avoid it.

The possibility of developing an addiction to marijuana is also very real, and anyone that notices a problem should seek addiction treatment when it adversely affects their health, or they find it difficult or impossible to quit on their own.