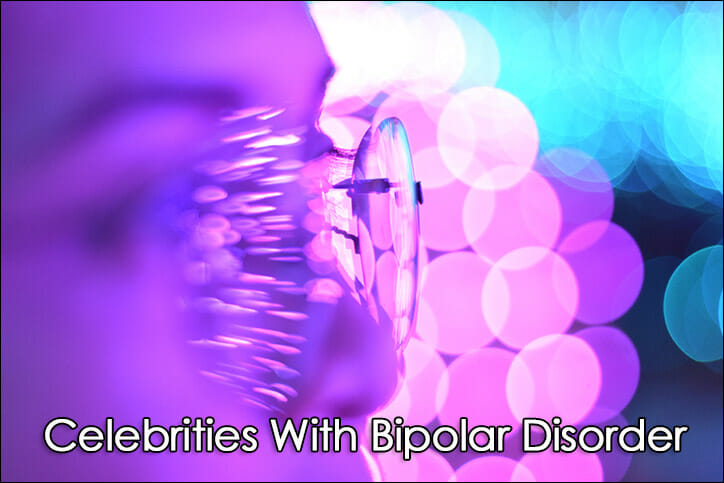 Because it’s a lot more prevalent than most people think, there are many famous people and celebrities with bipolar disorder, and many of them have started speaking out about the challenges of living with it.

Bipolar Disorder, formerly known as manic depression, is a mental health condition that comes with a lot of unnecessary stigma.

Since nearly 3 percent of adults in the United States struggle with the condition in any given year, it makes sense that a similar percentage of celebrities with bipolar would also experience the symptoms and difficulties it presents.

What is Bipolar Disorder?

Bipolar Disorder is a condition characterized by shifts in mood that can range from debilitating depression to a near uncontrollable manic phase, in which a person doesn’t sleep for days.

There are two primary types of the condition, known as Bipolar I and Bipolar II.

Bipolar I Disorder is diagnosed in those that have experienced at one least one manic episode, which leads to increased and often chaotic energy levels.

These episodes include being extremely talkative, feeling either elated or irritable, and being at a greater risk for engaging in risky behaviors. Bipolar I Disorder also comes with at least one episode of major depression.

This may explain some of the erratic behavior portrayed in the media by celebrities with bipolar, which people who are not famous don’t have to contend with, and can keep their condition private.

In the case of Bipolar I Disorder, it usually runs throughout a person’s life. It can sometimes result in hospitalization, and long-term treatment typically requires some form of medication.

Bipolar II Disorder is not necessarily a milder form of bipolar, although it is characterized by episodes of depression and hypomania, which is a less severe form of mania.

Hypomania is often interpreted as being highly productive, though it can also be incredibly disruptive and problematic for quite a few people.

Bipolar II Disorder usually requires some form of treatment to keep the symptoms under control and provide stability for those dealing with the condition.

People with the disorder can live healthy and productive lives with treatment, as demonstrated by the many famous people with bipolar who have been highly successful in their careers.

Remaining healthy, as with any kind of chronic health issue, can require dedication and vigilance, staying on medication, seeking therapy when necessary, and not ignoring the warning signs of depression, mania, or hypomania.

As mentioned earlier, bipolar affects approximately 3 percent of the U.S. population, and because nobody is immune, it crosses into all areas of work and life.

Fortunately, many famous people with bipolar have used their notoriety and access to the media to speak out about the impact it had on their life, so others will know they are not alone and that treatment can help.

Singer, songwriter, actress and producer Mariah Carey has won too many awards to list. The iconic artist opened up in 2018 about her 2001 diagnosis of bipolar disorder, in which she was hospitalized for a physical and mental breakdown.

“I sought and received treatment, I put positive people around me, and I got back to doing what I love – writing songs and making music,” Carey said in an interview.

Robert Downey Jr. is an Academy Award nominee and Golden Globe winning actor who had a very public and years-long struggle with addiction to drugs and alcohol. For some, similar struggles may have ruined their careers, but Downey, who has reportedly been sober since 2003, has thrived.

Though he has not publicly stated that he has bipolar disorder, Downey’s stepmother said, in a 2000 interview with People Magazine, that the actor had been diagnosed “a few years ago,” adding that the condition was “the reason he had a hard time staying sober.”

Best known for her portrayal of Sarah Connor in “The Terminator” film franchise, Linda Hamilton discussed her struggles with depression and bipolar disorder on CNN’s “The Larry King Show” in 2005.

During the interview, she talked about violent mood swings and suicidal thoughts, both of which she believed lead to the failure of two marriages, before she eventually received therapy and medication to manage her condition. 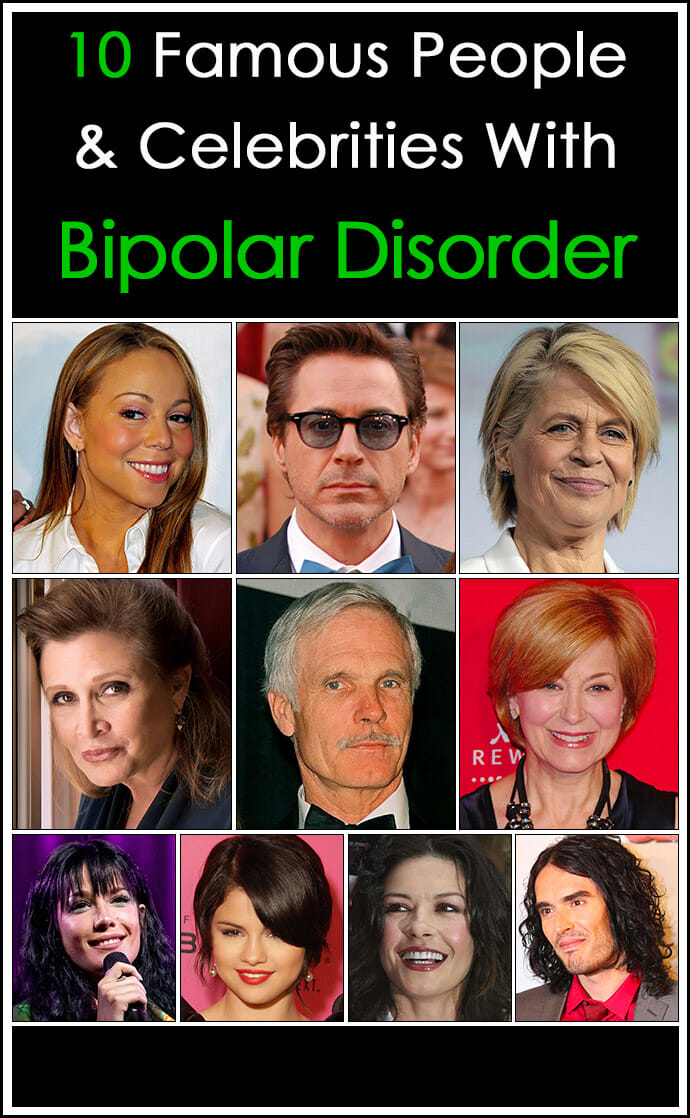 Carrie Fisher, who is most famous for playing Princess Leia in the original “Star Wars” trilogy, had a very public struggle with addiction to drugs and alcohol, and much of that was driven by her struggle with mental illness.

The daughter of famous parents, Debbie Reynolds and Eddie Fisher, the actress broke new ground and earned critical acclaim for talking openly about her battle with bipolar disorder and drug abuse.

Billionaire media mogul Ted Turner is the founder of both Turner Broadcasting and CNN. Despite having battled bipolar disorder for much of his life, he was able to attain great success as a businessperson. Turner is said to have taken lithium to help manage his symptoms.

Journalist, television host, author, and the woman widely accepted as Barbara Walter’s successor, Jane Pauley made her bipolar disorder public in her bestselling memoir, “Skywriting: A Life Out of the Blue.”

In a 2014 interview Time Magazine, Pauley is said to have stated, “Part of my advocacy is not talking about the stigma. It’s real, but it doesn’t help us move forward. My other message is I take my meds every day. No holidays. I’ve not had a recurrence.”

Born Ashley Frangipane, the pop singer Halsey was diagnosed with bipolar disorder after a suicide attempt when she was 17, and said she started abusing drugs shortly after her diagnosis.

Though she’s drawn criticism for calling herself “tri-bi” for being biracial, bipolar, and bisexual, Halsey said she has embraced her bipolar diagnosis because it makes her “really emphatic.”

An Academy Award winning actress, Catherine Zeta-Jones has been open about her diagnosis of Bipolar II Disorder, though she’s stated she only talked about it with apprehension. Around 2007, she pulled back from a busy acting schedule to focus on her family and health.

After some personal struggles, including being hospitalized for bipolar in 2011 and 2013, Zeta-Jones and her husband, actor-producer Michael Douglas, briefly separated as a result of the stress caused by her illness, though they reconciled in 2014.

Singer, actress, and producer, Selena Gomez has spent much of her life in the spotlight, which can be extremely stressful. Much to her credit, the young artist has been extremely open about battling both anxiety and depression.

In April 2020, she revealed that she’d been diagnosed with bipolar disorder, and has since founded Wondermind, “a company setting out to create a world where caring for your mental health is democratized and destigmatized.”

Comedian, actor, radio host, and podcaster Russell Brand is very open about many of the struggles he’s faced in his life and career. According to his biography, he has been diagnosed with ADHD, has suffered bulimia, a period of self-harming, drug addiction, and has suspected bipolar disorder since early adolescence.

While many adore the outspoken Brand and others find him a little more than over-the-top, the comic once described the concept of fame as being like “ashes in his mouth.” Though he’s talked about being bipolar, Brand said he was only treated for depression.

Below is a quick list of other celebrities with bipolar who have either been diagnosed or talked about living with the symptoms of the condition.

Some of these people have struggled with both bipolar and substance abuse issues and it’s quite common for these types of co-occurring disorders to require dual diagnosis rehab treatment for recovery to be successful.

Regardless of the extent of the condition, seeking treatment early at the first sign of symptoms offers the best chance of managing bipolar and living a healthy and productive life.