We’ve all experienced sadness or feelings of being depressed periodically, but there are different types of depression. If the feelings last for more than a short time or appear regularly, it may be necessary to get a proper diagnosis and treatment.

Even though people are now more aware of depression as a mental health disorder than ever before, they might not know how prevalent the condition is.

According to the National Institute of Mental Health, around 21 million people suffered a major depressive episode in 2020, which is more than eight percent of the U.S. population. That number skyrockets when considering how many people will battle depression in their lifetime.

Not all depression is the same, however, which is why it’s important to understand some of the various types of depression.

In short, depression is a mood disorder with symptoms that can range from mild to severe and causes feelings of hopelessness, worthlessness, and anxiety, among others.

Beyond just feelings, depression can lead to problems with sleeping, eating, memory, and the ability to concentrate.

As the symptoms of depression pile up, they can seriously impair a person’s ability to function in their daily life. Many people struggling with depression find that they’ve lost interest in activities, places, or relationships they once cherished and begin to withdrawal from much of their normal life.

Without treatment, the condition can worsen, last longer, and in very serious cases, may lead to drug or alcohol abuse, self-harm, and even suicide. People do not have to suffer without hope, though.

Treatment for the different types of depression can be incredibly effective.

What are 7 Types of Depression?

The various types of depression are classified according to their symptoms and, in some cases, the cause of the episode.

That said, depressive episodes do not always have a clear cause, and can last longer for some people than others. 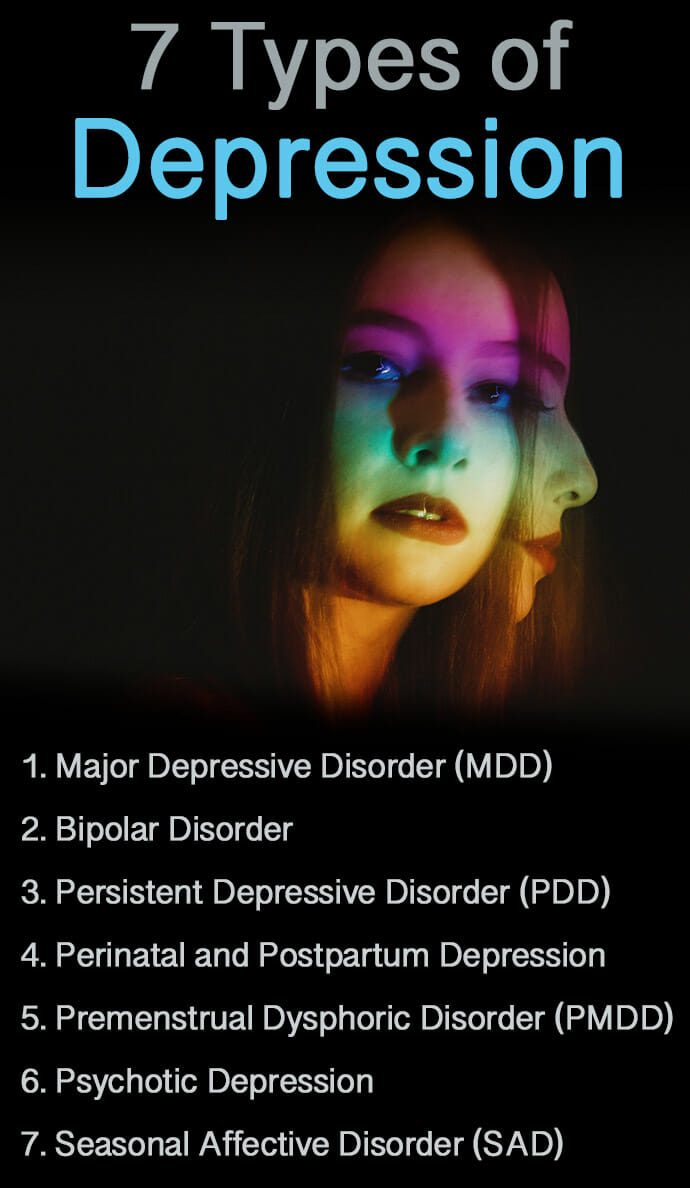 Major Depressive Disorder (MDD) is often referred to as a clinical depression and severely impacts a person’s ability to function in daily life, with sometimes overwhelming symptoms that last for longer than two weeks.

When most people talk about depression, they are usually referring to major depressive disorder.

Bipolar Disorder is a mental health condition characterized by alternating bouts of extremely low, depressive moods and periods of intense energy and mania.

The depressive episodes will typically include feelings of sadness, loneliness, and hopelessness, combined with a severe dip in physical energy.

The Depression and Bipolar Support Alliance (DBSA) states that nearly 5.7 million adults in the United States struggle with bipolar disorder each year.

Nobody is immune to this type of depression and some celebrities with bipolar have been outspoken about how treatment has positively impacted their lives.

Persistent Depressive Disorder (PDD) was previously referred to as dysthymia, and the symptoms of are less overwhelming than major depressive disorder, but this condition tends to have symptoms that last for two years or longer.

Because persistent depressive disorder is not as severe as major depression, some people call it high functioning depression due to its less debilitating nature, although that term is not an actual diagnosis.

Perinatal and Postpartum Depression is a condition that occurs with the onset of depressive symptoms either during pregnancy or up to a year after giving birth.

With this type of depression, the symptoms are typically more serious than just minor feelings of stress, worry, or sadness.

With PMDD, the onset of symptoms occur in the days or weeks leading up to their menstrual period, and can impair the ability to carry out normal day-to-day functions.

Psychotic Depression is a type of depression marked by very serious symptoms of depression, along with hallucinations, seeing, hearing, or feeling things that are not there.

Psychotic Depression can also include delusions, which are beliefs that are not based in reality.

Seasonal Affective Disorder (SAD) is sometimes referred to as seasonal depression, and most people who experience this type of depression have the onset of symptoms in late fall and winter, when there is less sunlight.

Seasonal depression symptoms tend to lift during the summer and spring months when the days become longer and people spend more time outside soaking up sunshine.

Other Types of Depression

The 7 types of depression listed above are the most commonly diagnosed, although there are others that either fit outside of a diagnostic criteria or are included within those already mentioned. Some of these include:

DSM-5 Diagnostic Criteria for the Types of Depression

The Diagnostic and Statistical Manual of Mental Disorders, DSM-5, is the mostly widely used psychiatric manual in the United States, often referred to as the “Bible of Psychiatry.”

For most types of depression, the DSM-5 outlines the primary criteria needed for an official diagnosis, which include the following:

These symptoms must be present for at least two weeks in order for a diagnosis of depression, as well as cause a person significant impairment at work, school, or other areas.

Finally, these symptoms cannot be the result of a medical condition, or as a result of drug or alcohol abuse, known as a substance induced mood disorder. How are Various Types of Depression Treated?

Despite how common the different types of depression are, many people will ignore their symptoms or attribute them to something unrelated. In very serious cases of depression, this can be life-threatening if a person is struggling with suicidal thoughts.

Depression is often a diagnosis that a primary care physician can make and, to some degree, provide treatment options. However, if depressive symptoms do not lift after four to eight weeks, your physician may recommend a psychiatrist.

Some of the Treatment Approaches for Types of Depression include:

The most common antidepressant medications are selective serotonin reuptake inhibitors (SSRI’s), such as prescription drugs like Lexapro, Paxil, Zoloft, or Prozac.

These medications help regulate the amount of serotonin in a person’s body and help lift depressive symptoms.

There are also other medications that can be prescribed for some types of depression depending on the symptoms, causes, and duration.

Psychotherapy and counseling combined with medication has shown to be very effective, although one-on-one counseling by itself may also help a person move through minor depressive symptoms.

There are numerous evidence-based behavioral therapies that have shown to be successful for treating various types of depression.

Transcranial Magnetic Stimulation, also known as TMS Therapy, uses magnetic pulses to stimulate parts of the brain responsible for mood. It is FDA approved as a safe, non-invasive depression treatment.

TMS Therapy is an option for people with treatment-resistant depression after several rounds of medications have failed to provide relief for the symptoms.

Lifestyle changes are often overlooked by people with many types of depression, and they can actually be quite effective for overcoming the symptoms.

Simple changes to daily life, including diet, exercise, and proper sleep habits, can have an enormous impact on a person’s depressive symptoms.

A healthy, well-balanced diet of lean proteins, fresh fruits, and vegetables helps people avoid spikes and dips in blood sugar that have an impact on mood. Some foods that increase serotonin are especially helpful for improving mood.

Exercise helps reduce symptoms of stress and worry by naturally increasing the production of feel-good neurotransmitters in the brain.

Both diet and exercise also assist the body in getting proper sleep, the lack of which can have a serious impact on mood regulation.

The information provided here is a simple overview of 7 types of depression, along with how the condition is diagnosed and treated.

For anyone prone to frequent or lasting depression symptoms, it is recommended to speak with a doctor as soon as possible to get a proper diagnosis and treatment before it progresses.