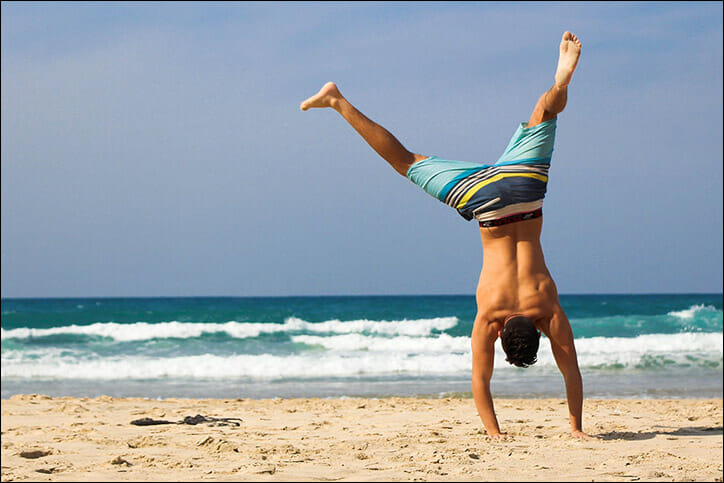 Knowing how to increase dopamine naturally is beneficial for improving mood, motivation, and how we feel on a daily basis.

Dopamine deficiency has been linked to a number of health issues, such as depression, mood disruption, sleep disturbances, and even struggles with addiction.

Maintaining proper levels of dopamine is important for enhancing overall physical and mental health, and it’s easy to do with some simple lifestyle adjustments.

The body naturally produces dopamine, which is both a hormone and a neurotransmitter.

As a neurotransmitter, it acts as a chemical messenger between nerve cells in the brain and the rest of the body. Dopamine is often referred to as the “pleasure chemical” because of its role in the brain’s reward system and function.

In fact, each time we engage in a pleasurable activity, whether it’s having a nice meal, sexual intercourse, or going for a walk, the brain releases small amounts of dopamine that reinforce this type of behavior.

Even though dopamine is involved in helping us feel pleasure, many people feel it would be better served by calling it the reward or motivation chemical, than the pleasure chemical.

Dopamine is also considered one of the four “feel good hormones” because it is released into the blood stream to control various functions such as mood, sleep, and motivation, among others.

Why Increase Dopamine – What Does it Do?

Because dopamine plays a vital role in functions like concentration and focus, memory, productivity, motivation, and the ability to experience pleasure, it’s important to maintain optimal levels for overall wellness.

There are, unfortunately, downsides to increasing dopamine from habit-forming substances, like nicotine, caffeine, prescription painkillers, illicit drugs, or alcohol.

When we use addictive substances, the brain is known to release a surge of dopamine, which not only causes a person to feel pleasure, but also reinforces that behavior.

This might seem relatively harmless where morning coffee is concerned, but can be seriously problematic when it comes to things like cocaine, heroin and opioids, or even alcohol.

As the brain is repeatedly flooded with dopamine from unhealthy activities such as substance use, it will begin to reduce it’s own natural production of the neurotransmitter and leave a person feeling depressed or anxious.

This can then lead to increased pleasure seeking behavior, such as using even more drugs or alcohol to unwittingly boost the brain’s level of dopamine to feel good or, as time progresses, to simply feel “normal.” 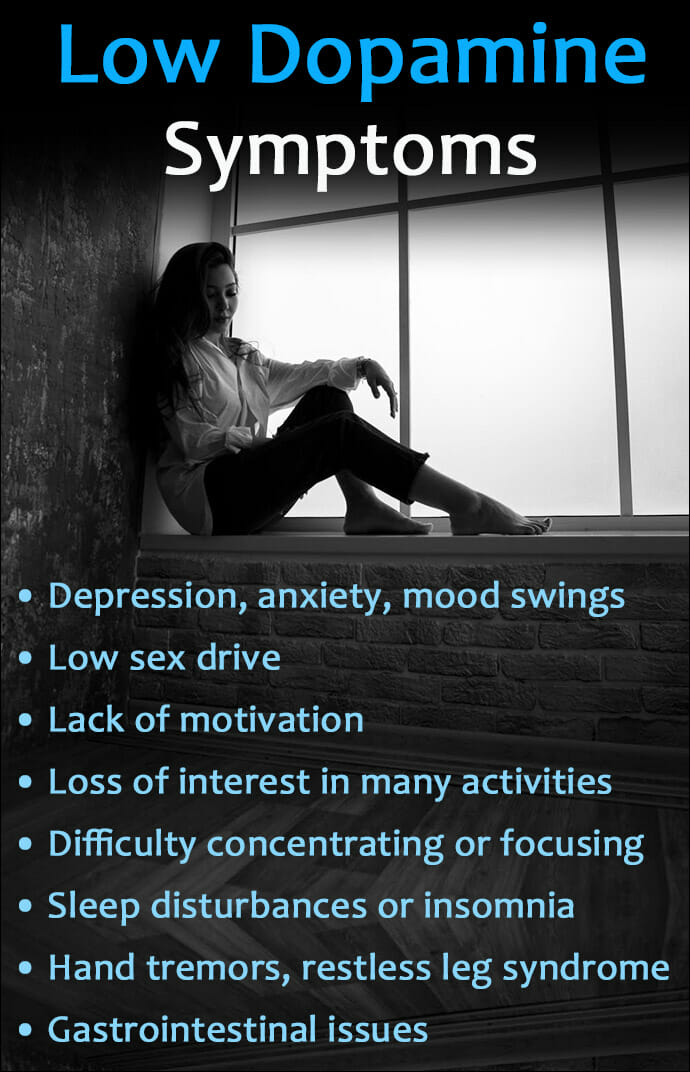 There are a number of different reasons why a person may experience low levels of dopamine, including some medical conditions like Parkinson’s disease, schizophrenia, or even traumatic brain injury that causes damage to areas of the brain that produce the neurotransmitter.

Other reasons for a Low Dopamine Deficiency Include:

Substance Use and Abuse

Because substances like drugs and alcohol cause a surge of dopamine, the brain will naturally reduce production of the neurotransmitter, leaving a person feeling depressed, anxious, or overwhelmed.

This lack of dopamine production can lead to dependency and addiction where some substances are concerned, because the brain relies on them to feel pleasure. Finding ways to increase dopamine naturally is a much healthier choice.

Diets with too little protein containing tyrosine, an amino acid, can lead to dopamine deficiency. Lean proteins combined with fresh fruits and vegetables are a good way to maintain a diet that is good for overall health and will increase dopamine naturally.

There are some medications that can lower dopamine levels, such as antipsychotic prescriptions or antidepressants. These drugs are known to bind to dopamine receptors in the body, which may lower the natural production of the neurotransmitter.

Regardless of the cause of dopamine deficiency in the body, there are a number of symptoms that can lead to a diminished quality of life.

Low Dopamine Deficiency Symptoms can Include Some of the Following:

The severity of the symptoms can vary among individuals and may be related to the root cause of the deficiency, such as whether symptoms are related to substance abuse or Parkinson’s disease, for example.

How to Increase Dopamine Naturally

Learning how to increase dopamine naturally is easier than most people think. In fact, many people might already be engaging in some of these activities and not even know it.

What’s even more interesting is that practicing healthy habits to increase dopamine are reinforced by the reward and motivation benefits of the neurotransmitter itself. 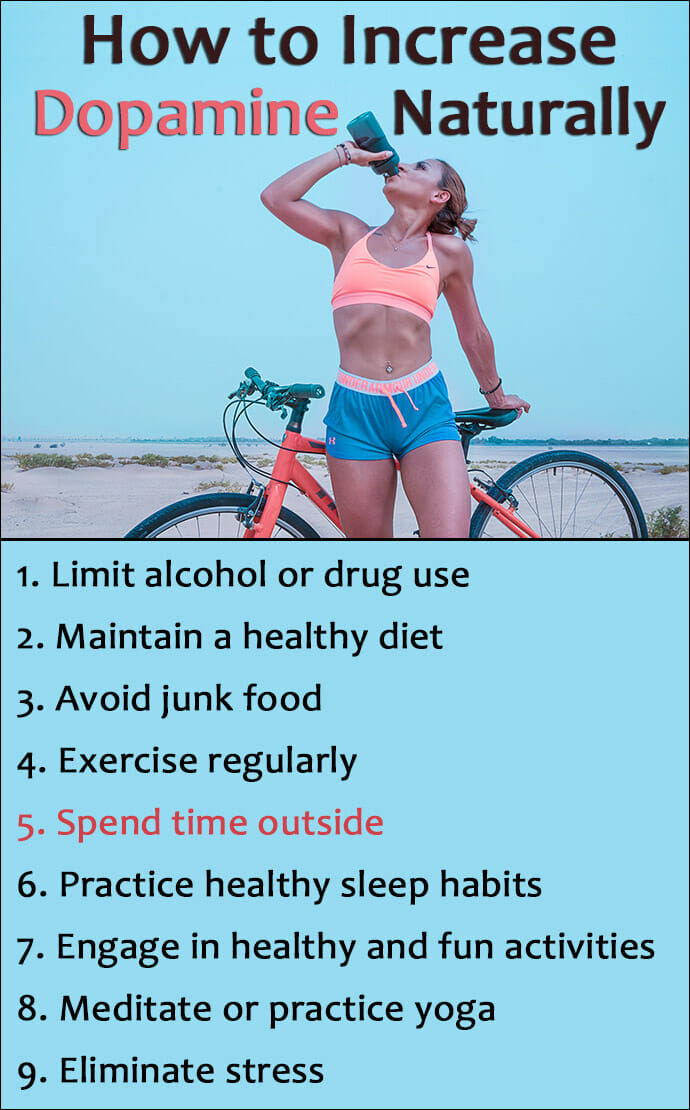 1. Avoid overindulging in alcohol or recreational drug use

While occasionally having a glass of wine or using cannabis may not have a negative impact on some people’s lives, others struggle with moderate use of drugs and alcohol, which cause a surge of dopamine.

In some cases, treatment for a substance use disorder can help people get back on track and restore healthy levels of dopamine during recovery.

A healthy diet rich in fresh fruits and vegetables combined with lean proteins, such as fish, eggs, chicken, and other poultry that contain tyrosine will help increase dopamine levels.

Other foods known to contain tyrosine include avocados, peanuts, oats, leafy green vegetables, watermelon, and olive oil. Many of the same foods that increase serotonin levels will also work for dopamine.

Junk food, similar to drugs like caffeine, nicotine, alcohol, and others, can cause a small but temporary surge of dopamine. This reinforces the body’s desire to consume unhealthy snacks that cause a spike and crash of the body’s blood sugar levels, along with dopamine.

Getting regular exercise is always on the list of things that make life better, and it’s no different when it comes to dopamine. Even just a brisk 30-minute walk every day can lead to healthier levels of dopamine.

It may seem challenging at first, but establishing a regular exercise routine is easier than many people think, and the pleasurable release of dopamine from the activity will reinforce the behavior.

Spending time outside is easily paired with exercise, especially during the summer and spring months when the weather is nice.

At least one study has shown that people who had more time in the sunlight had an increased number of dopamine receptors, compared to those who got less time in the sunshine.

Practicing healthy sleep habits can be easier said than done, but most people need 7 to 9 hours of sleep a night for healthy brain functioning.

Establishing a pattern of going to sleep every night at the same time and getting up in the morning at the same time, even on the weekends, allows the brain and body to receive the required rest it needs to produce healthy levels of dopamine.

Obviously this will vary from person to person, but engaging in healthy and pleasurable activities will naturally increase dopamine to benefit the mind and body.

These activities can include anything from hiking, to spending time with family or friends, learning a new language, playing a musical instrument, or even listening to music.

While meditating or practicing yoga might seem a bit on the “new age” spectrum for some people, both of these activities can quiet the mind and provide some much needed relief from stress.

There is even research that suggests meditative yoga does increase dopamine production and modulates synapses in the frontal cortex of the brain.

9. Eliminate as many life stressors as possible

Toxic or chronic stress can wreak havoc on our life and is often a key driver of unhealthy behaviors, such as alcohol and drug use that lead to dopamine deficiencies.

It’s not always easy to eliminate stress on our own. Seeking counseling or therapy can help people identify, alter, or remove stressors from his or her life that may ultimately increase dopamine levels and lead to a healthier and a better overall life.

Most of these suggestions for how to increase dopamine can be fairly easy to incorporate into daily life and offer the benefits of better mood and mental health.

For those who have low levels due to to substance use, drug or alcohol treatment for addiction may be necessary to get back on track with a healthier lifestyle.