Alcohol dependence and addiction is usually associated with more common health problems like cardiovascular disease and cirrhosis of the liver, as well as increasing a person’s risk for certain cancers.

While all of the unhealthy side effects of long-term or excessive alcohol use are concerning, wet brain can be especially problematic since it is not well known and can be avoided if addiction is treated earlier.

Wernicke-Korsakoff Syndrome, which is named for two doctors, Carl Wernicke and Sergei Korsakoff, can cause debilitating brain damage, and if not diagnosed and treated may ultimately lead to death.

What is Wet Brain Syndrome?

In short, wet brain is a condition brought on by a deficiency of thiamine, which is more commonly known as Vitamin B1.

In the United States, Wernicke-Korsakoff Syndrome is usually the result of chronic alcohol abuse, though it can also be the consequence of malnutrition or a severe eating disorder.

According to the National Organization of Rare Diseases (NORD), research suggests there may be a genetic predisposition to the disease.

Even though Wenicke and Korsakoff’s syndromes are related, scientists view the disorders as different stages of the same condition.

Wernicke’s Encephalopathy is known as the acute stage of the disorder, whereas Korsakoff’s Psychosis represents the condition’s chronic stage. 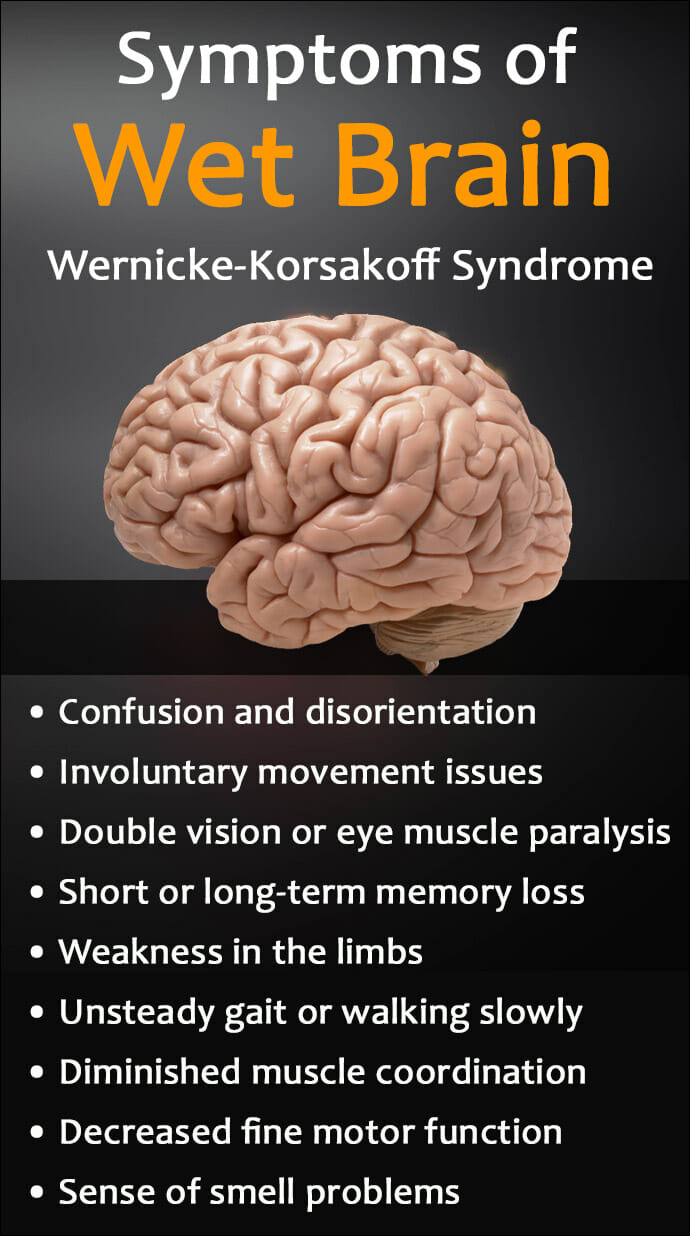 The two distinct, though overlapping disorders each come with particularly serious health symptoms.

If left undiagnosed or untreated, the condition can lead to irreversible, lifelong damage and even death.

The main symptoms of Wernicke’s Encephalopathy can include:

The primary symptom of wet brain in the Wernicke’s stage is confusion and disorientation, which tends to develop over a period of a few days or weeks.

With Korsakoff’s Psychosis, the main symptoms present as some of the following:

People with Korsakoff Syndrome are typically unaware that they’re suffering from the disorder.

Other symptoms of wet brain can include:

As the symptoms become worse for patients in the advanced stages of Wernicke-Korsakoff Syndrome, somewhere around 10 to 20 percent will experience a coma and then death.

As mentioned earlier, a thiamine deficiency is the main cause of wet brain or Wernicke-Korsakoff Syndrome.

Also known as vitamin B1, thiamine is a vital nutrient the body uses to metabolize glucose that the brain then uses for energy.

A lack of thiamine can devastate certain regions of the brain like the hypothalamus, which regulates emotions, growth, appetite, and body temperature.

Alcohol diminishes the body’s ability to absorb thiamine, as well as making it difficult for the liver to maintain its stores of the vitamin. Alcohol use also blocks the enzyme that converts thiamine into a useful and active state.

Chronic alcoholics, especially in the United States, are at the greatest risk of developing wet brain syndrome or its symptoms.

Not only does alcohol hamper thiamine production, people battling severe addiction to alcohol may also have an incredibly poor or unhealthy diet that also lacks many other essential vitamins and nutrients.

Overall, the condition is present in about 1 to 2 percent of the population between the ages of 30 to 70-years old. Men usually appear to experience a slightly greater risk for the condition than women.

Any person with long-term issues of alcoholism or even those suffering a severe short-term alcohol use disorder experiencing symptoms should seek immediate medical attention and treatment for alcohol addiction. The very first step to treating wet brain is replacing the loss of thiamine, usually by administering the vitamin intravenously.

This first step for the treatment of Wernicke-Korsakoff Syndrome symptoms is likely to continue daily for several months, though a patient might event begin taking oral thiamine supplements.

In addition to thiamine supplements and other forms of addiction treatment, a healthy, well-rounded diet is essential for recovery.

Most patients require a proper diet regimen to boost all of the low nutrient levels that are usually caused by malnutrition.

Abstaining from alcohol is mandatory for anyone hoping to recover from wet brain or Wernicke-Korsakoff Syndrome.

Most people who suffer with this condition will require alcohol treatment to overcome a dependence or addiction to alcohol.

During treatment, recovery approaches like Cognitive Behavioral Therapy (CBT), relapse prevention therapy, and other interventions will be used to ensure the patient abstains from any and all alcohol use in both the short and long term.

Most people will require alcohol detox monitored by medical professionals to keep them safe and comfortable throughout the withdrawal process.

If wet brain symptoms are severe, detox may need to happen in a hospital until the patient is healthy enough to be discharged to a proper alcohol addiction program for continued treatment.

If diagnosed and treated early enough, Wernicke Syndrome may not progress into the chronic Korsakoff’s Psychosis stage, and issues with coordination and gait may be improved with physical therapy.

Most people have a basic understanding of the dangers of excessive drinking – either too much periodically or regularly for many years straight.

Unfortunately, few people know about the most serious conditions of alcohol abuse like wet brain or Wernicke-Korsakoff Syndrome.

Hopefully a better understanding of these conditions will lead to more people seeking treatment before they progress to the later stages.