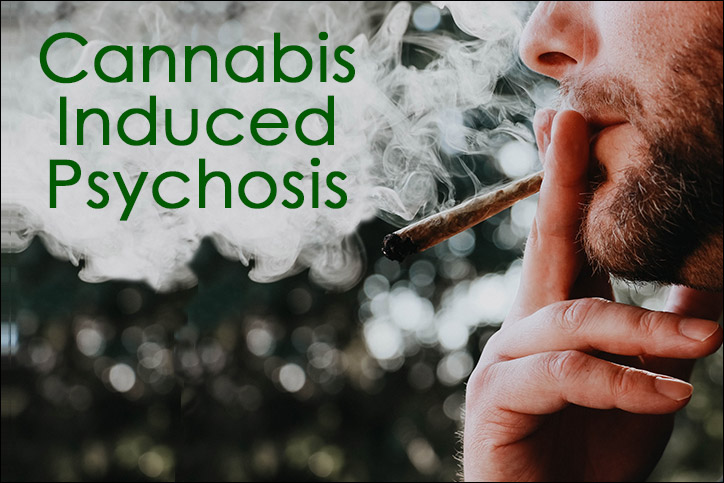 Cannabis Induced Psychosis (CIP) is a relatively rare condition, but it’s important to understand that using marijuana does in fact come with some risk.

Marijuana legalization and use is on the rise across the country at the same time that THC potency levels are skyrocketing.

The combination of increased use and more potent strains of marijuana has the potential to lead to a spike in the number of people who experience cannabis induced psychosis or other related negative health issues.

The condition is a form of substance induced disorder that leads to a mental health issue caused from substance use, in this case marijuana.

What is Cannabis Induced Psychosis?

Psychosis itself is a set of symptoms often related to serious mental illness. Psychoactive substances, such as cannabis, psilocybin mushrooms, LSD, and other drugs, can also lead to a form of psychosis.

In many cases, people with a pre-existing mental health condition, such as schizophrenia, bipolar disorder, and others, are at a higher risk for developing cannabis-induced psychosis.

The symptoms of psychosis are characterized by a break with reality.

Three Common Symptoms of Psychosis Include:

Disassociation is a sense or perception that a person is not actually connected to the world around them, often feeling as if they’re not in their body or that the things around them are not real.

Hallucinations are auditory or visual sensations experienced by a person that are not real. In some cases, other senses can also be affected, such as touch and smell.

Delusions are the belief in something that can be proven to be false, such as the feeling of being immortal or thinking that everyone is out to get them

Cannabis-induced psychosis, sometimes called marijuana psychosis, involves a break from reality, with symptoms of psychosis that first appear during marijuana use or shortly thereafter.

The condition is well documented, and research has shown that psychotic outcomes can range from mild to severe and last from minutes to years.

However, in the majority of cases, many of the symptoms of cannabis-induced psychosis tend to subside shortly after the drug has worked its way out of the body or a person stops using marijuana.

Marijuana is often touted as medicinal, but it can actually worsen the symptoms of an existing mental health condition. For instance, individuals battling anxiety disorders or those who are suffering from some types of depression may experience symptoms that are more intense than normal because of the psychoactive properties of weed.

While the primary symptoms of cannabis-induced psychosis are delusions, hallucinations and disassociation, there are other indicators that a person might be experiencing the condition.

Other Marijuana Induced Psychosis Symptoms Include: There are several risk factors that can make a person more susceptible to developing marijuana induced psychosis.

4 Risk Factors for Marijuana Psychosis May Include:

Some research suggests marijuana use at a young age can increase the chances of cannabis-induced psychosis and other mental health issues later in life. This is especially true for teenagers while the brain is still developing.

People with a genetic family history of mental illness or substance use disorders may be at a greater risk of developing mental health issues related to using marijuana.

THC is the primary psychoactive ingredient in cannabis. Strains of marijuana with a high percentage of THC may be more likely to induce the symptoms of cannabis-induced psychosis.

4. Frequency and Duration of Marijuana Use

Regular and long-term marijuana use can increase the likelihood that a person may experience signs and symptoms of this type of psychosis.

Though a majority of states in the U.S. allow for some form of legal marijuana sales and consumption – medicinal, recreational, or both – cannabis is still the most commonly used federally illegal drug, according to the Centers for Disease Control and Prevention.

In other words, cannabis use is so common that many people who use it fall into one or more of the risk-factor categories.

It can be difficult for medical professionals to correctly diagnosis marijuana induced psychosis as opposed to general psychosis because the symptoms are very similar. The key distinguishing factor for CIP is the presence of marijuana use.

A diagnosis of cannabis induced psychotic disorder requires several factors, such as the presence of delusions and hallucinations, and more specifically that the delusions or hallucinations develop during or shortly after cannabis intoxication.

It should be noted that cannabis intoxication can take minutes for a marijuana user to feel the effects of the drug when smoked, yet take several hours when eaten or ingested orally.

Sometimes psychosis brought on by marijuana may be an indicator that a person is suffering from a substance use disorder, mental health issues, or both, and should seek treatment from medical professionals.

In the short-term, the primary treatment for cannabis induced psychosis is to stop all marijuana use.

Stopping all cannabis use might not be easy for some people who are dependent or addicted to marijuana.

In some cases, people with a marijuana use disorder may need to undergo substance addiction treatment to address underlying problems, such as past trauma, depression, anxiety, or other mental health conditions, that drive addictive marijuana use and cause the symptoms of psychosis.

Detox may or may not be required, although dual diagnosis treatment for addiction and mental health might be the most effective approach for recovery.

In severe cases of cannabis induced psychosis, where a person may present a danger to themselves or others, immediate medical attention is needed, followed by longer-term recovery approaches.