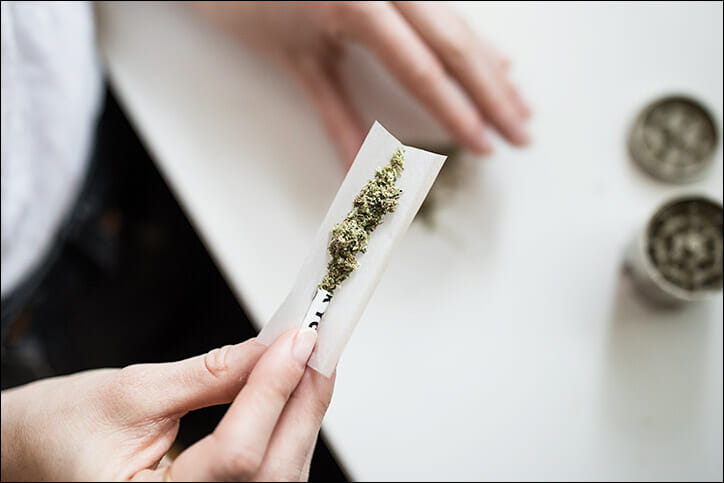 As states across the U.S. continue to topple like dominos when it comes to legalizing cannabis in some form or fashion, the likelihood that people are mixing marijuana with prescription antidepressants increases. The question then becomes, is it safe to use drugs like Lexapro and weed together?

Though it might seem odd, there is actually very little research on the combination of marijuana and antidepressants.

One reason for this is that marijuana is still classified as a schedule I narcotic by the federal government.

At the federal level, cannabis is considered to be a drug with no accepted medical use and a high probability for abuse. This interpretation makes funding research and getting studies approved nearly impossible.

What we do know according to Pew Research, is that more than half of Americans have tried marijuana, with an estimated 11 percent of people saying they’ve used the substance in the past month.

In addition, the Centers for Disease Control and Prevention reports that 13.2 percent of adults used antidepressants in the past 30 days, making them the most frequently used therapeutic medications in the nation.

The World Health Organization estimates that approximately 280 million people struggle with depression and it is one of the most common mental health disorders globally.

Because it is so widespread, Hollywood has made many movies about depression as an example of art imitating life.

Is Mixing Lexapro and Weed Dangerous?

The short, and less than definitive answer, to this question is, it depends. Cannabis can certainly make some people feel relaxed, euphoric and less stressed. In others, though, THC can cause anxiety and, if used habitually, is known to actually lead to depression or anxiety.

Escitalopram, the generic form of Lexapro, is a Selective Serotonin Reuptake Inhibitor (SSRI), which is one of the most commonly prescribed types of antidepressants.

SSRIs help to control levels of serotonin in the brain as a way to decrease the symptoms of depression.

Other SSRI antidepressants include:

In addition to SSRIs, other types of antidepressants are prescribed for depression and similar mental health conditions that include:

Many of these have been replaced with SSRIs, which are newer and considered to have fewer side effects, but they generally affect serotonin and neurotransmitters with similar results.

While a little extra “feel good” neurotransmitters might be good for treating depression, too much of it in the system can lead to serotonin syndrome, which according to the Mayo Clinic can cause potentially dangerous symptoms. Using marijuana and antidepressants together may cause such a reaction.

Even with the lack of research, the most widely accepted approach by experts is to avoid mixing drugs like antidepressant medications such as Lexapro and weed because everyone reacts differently to both drugs and there is always the chance of a negative interaction. 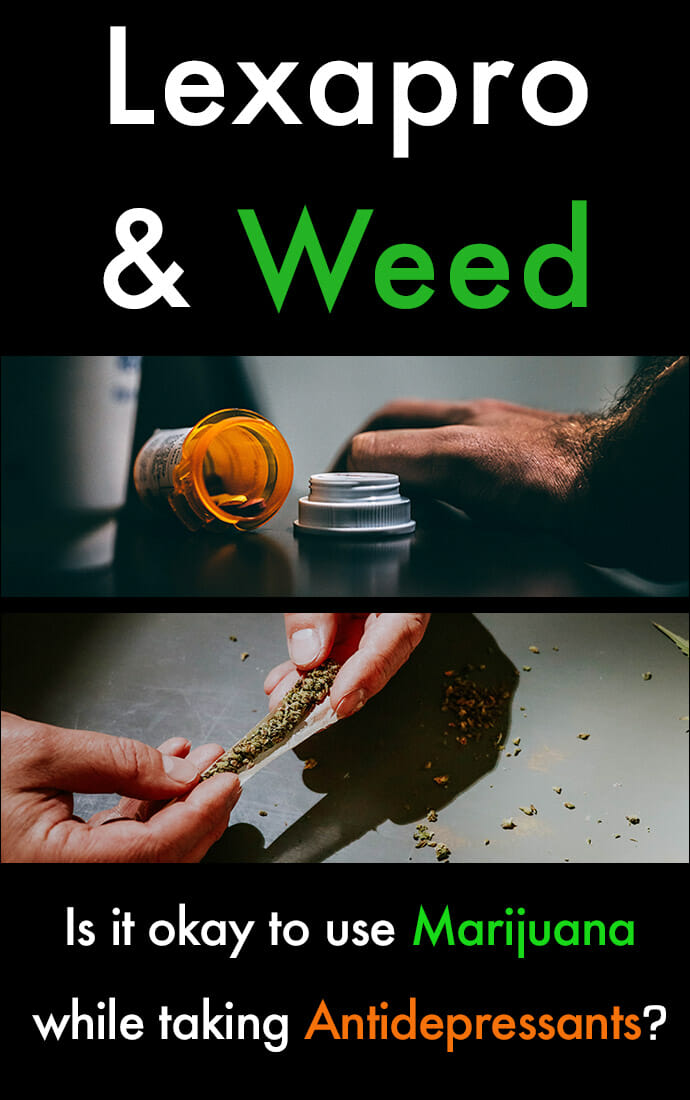 Complications of Mixing Weed and Lexapro or other Antidepressants

Outside of the somewhat fuzzy science of it all, there are of course other, more practical reasons for not mixing Lexapro and weed.

First, if a person receiving treatment for depression is prescribed antidepressants, it will be difficult or impossible to know for certain if the medication is working properly if he or she is smoking pot at the same time.

Many physicians treating depression will ask their patients to stop using marijuana while taking antidepressants, especially in the beginning, to make sure that the SSRI prescription is actually working.

It can take two to four weeks for an antidepressant to start being effective in treating a person’s depressive symptoms. It may also take more time to find the best dose or prescription medication since each person responds differently to the various drugs available.

Other reasons to avoid using antidepressants like lexapro and weed together include some of the following:

Can You Smoke Pot While on Antidepressants?

While they are not side effect free, most people report few problems from using Lexapro and weed or other SSRI antidepressants, even though experts say this does not necessarily make it safe to do.

Depression is a complex mental health disorder and marijuana can have adverse effects on individuals coping with mental health conditions.

Many people with depression start out using marijuana as a way to cope with depressive symptoms. For some, it works, at least in the beginning.

Over time and prolonged use, smoking pot may replace the natural ability of the brain’s endocannabinoid system to properly work as designed and so a person must rely on marijuana to regulate his or her mood and other functions.

In this case, smoking pot becomes the only way to feel happy and it actually makes depression worse.

When this happens, the normal response is to seek medical help for depression and a doctor will prescribe antidepressant medications.

The safest and most effective course of action when battling depression is to take a break from other recreational or illicit drugs while taking antidepressant medications and go to counseling.

Give the medications time to do their job alone without adding any other variables like marijuana to the equation. 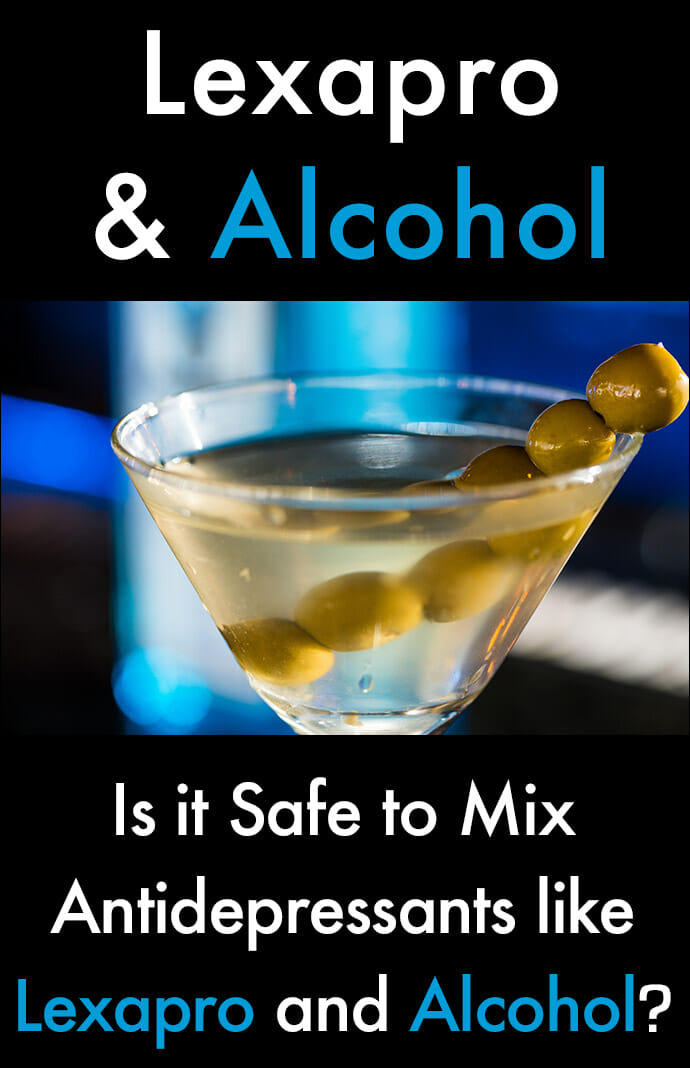 Is Lexapro and Alcohol Safe to Mix?

Similar to mixing with marijuana, it is unknown if using Lexapro and alcohol at the same time will cause any problems because there aren’t any studies on the subject.

Alcohol is considered a depressant, even though some people use it like marijuana to overcome the symptoms of depression. And like smoking pot, some may find relief from depressive symptoms in the short term.

Using alcohol to combat depression for a long period of time will only cause the symptoms to become worse.

Possible side effects of using Lexapro and alcohol together:

Like most medications, antidepressants may have some side effects that are exacerbated by using alcohol at the same time, so it’s best to avoid drinking with any type of prescription.

Some doctors warn against using alcohol and Lexapro together during treatment for depression and advise their patients to abstain from drinking.

The goal of using antidepressants is to overcome the symptoms of depression. The best way to do that is to use the medication by itself without alcohol or marijuana.

Alcohol is considered by most people to be more addictive than marijuana. Still, each substance can cause a dependence or addiction if used in large quantities or for a long time.

If it’s difficult or impossible to stop drinking alcohol or smoking pot long enough to let the antidepressants do their job, it may be a sign there is an underlying substance use disorder at play, which is most likely also worsening the symptoms of depression.

Struggling with depression and alcohol or marijuana dependence together is known as a co-occurring disorder, and it usually requires dual diagnosis treatment to recover from both conditions.

For people concerned whether Lexapro and weed or alcohol are safe to use together, it’s probably even more important to consider why a person would want to use them together.

It may be a sign an individual has an addiction to alcohol or marijuana in addition to depression, and seeking treatment for both conditions may be necessary.