The powerful horse tranquilizer drug Xylazine used by veterinarians to sedate large animals is showing up in illegal drugs like opioids, heroin, and cocaine, leading to a spike in overdose deaths that have experts worried.

The misuse of Xylazine, which goes by the names “Tranq” or “Tranq Dope” on the street, likely got its start being used by humans in Puerto Rico, and has quickly spread across the continental United States.

In a report published in March 2022, researchers found the horse tranquilizer in about 0.36 percent of overdose deaths in 2015.

Just five years later, in 2020, that number rose to 6.7 percent, and in certain parts of the country, xylazine was present in 1 in 5 fatal drug overdoses.

Most experts agree these numbers are likely underreported, and there is potentially a lot more xylazine in the illicit drug supply than is currently known.

What is the Horse Tranquilizer Drug Xylazine?

Xylazine is a horse tranquilizer drug and large animal sedative with pain killing and muscle relaxant properties that is not approved by the Food and Drug and Administration (FDA) for use in humans.

It goes by the trade names XylaMed, Rompun, Anased, Sedazine, or Chanazine and veterinarians sometimes use Xylazine and Ketamine together.

Studies in large animals have shown the tranquilizing effects of xylazine to usually last anywhere from one to four hours. However, due the potentially lethal side effects in humans, no amount of xylazine in the bloodstream is considered safe.

In a veterinary setting, xylazine comes as a clear liquid.

On the street, it is added to heroin, cocaine, methamphetamine, and benzodiazepines as way to boost the effects of those drugs. Like many other drugs, xylazine can be injected, snorted, smoked, or swallowed orally.

While it’s possible for the drug to be abused on its own, the National Institute on Drug Abuse (NIDA) reports that “…people exposed to xylazine often knowingly or unknowingly used it in combination with other drugs, particularly illicit fentanyl.”

The potential side effects of xylazine make the tranquilizer extremely dangerous for humans no matter how it is used or misused. Side Effects of Xylazine on Humans

One of the primary side effects of xylazine when used by humans is the suppression of the central nervous system, in which breathing, heart rate, and blood pressure are slowed to extremely dangerous and life-threatening levels.

The effects can be even more extreme when xylazine is mixed with heroin or fentanyl, like in many cases.

Common side effects of the Xylazine horse tranquilizer drug can include some of the following:

Xylazine is known to sedate human users for long periods, from six to eight hours at a time.

This not only increases the chance of a fatal overdose, but also puts users at risk of exposure injuries and being victims of sexual assault. 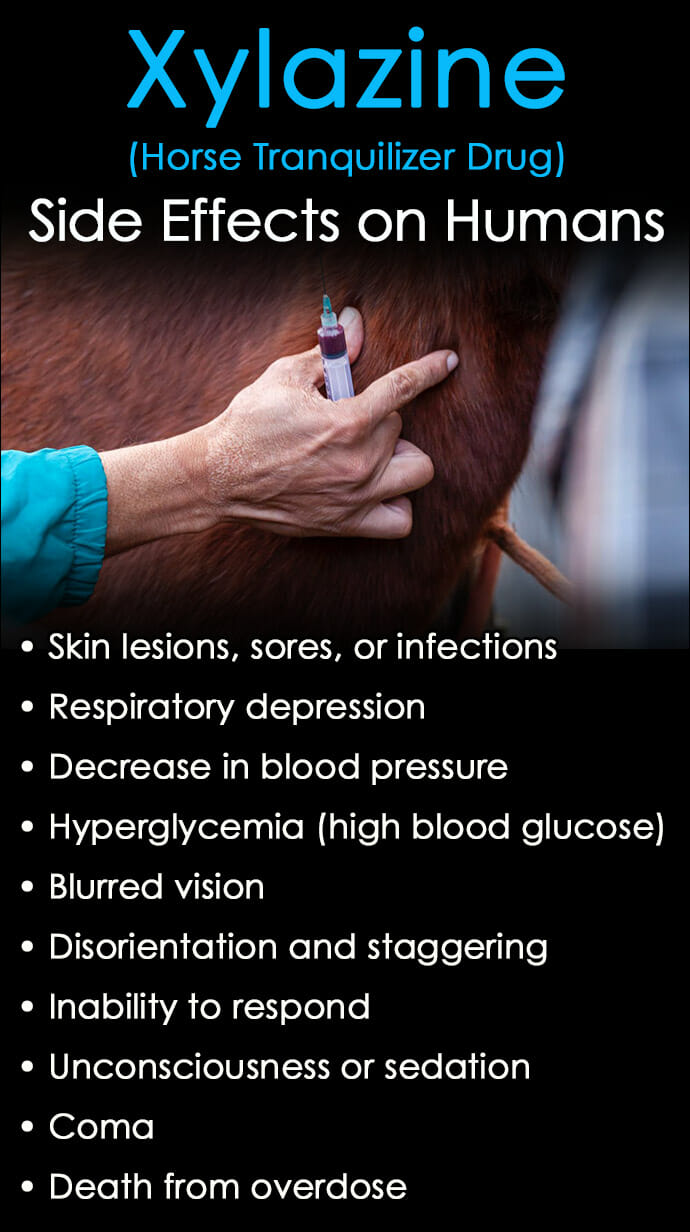 Xylazine is used to sedate large animals such as horses, which typically weigh in the range of 700 to 2000 pounds.

Because the average weight of an American male is approximately 200 pounds and 170 pounds for females, it’s easy to understand why this drug can be so dangerous.

A Xylazine overdose involving this horse tranquilizer drug looks similar to an overdose from opioids. For first responders, this presents a big problem.

Patients who have overdosed on a toxic amount of xylazine may look like they’ve had an opioid overdose, but they have a poor response to the life-saving opioid overdose reversal drug naloxone (Narcan).

In many cases, medical personnel may be completely unaware of the presence of xylazine or may in fact not even be aware of the drug’s existence yet.

Since it is being added to other opioids or heroin, first responders may be correct in using naloxone to revive the patient, although its use may be ineffective.

To compound the problem even more, most emergency room drug screenings do not detect or even test for the presence of the drug.

Currently, there is no approved antidote for a xylazine overdose in humans, except to support the patient’s breathing as much as possible and stabilize blood pressure.

Regrettably, many life-saving methods might not be appropriate if doctors and nurses mistakenly treat an opioid overdose instead of a sedative or tranquilizer overdose.

Addiction Treatment Could Save a Life

Though news about xylazine is only starting to emerge, people who buy illicit drugs may be unaware that they’ve been using it.

To make matters worse, there are no harm-reduction methods yet available for users to detect xylazine in a particular drug like there are with Fentanyl test strips.

So, the danger of a fatal overdose from this horse tranquilizer drug is always a risk.

Much like Fentanyl, Xylazine is an adulterant, meaning it is added to drugs like heroin or cocaine to manipulate or change the way they make users feel when taking them.

Some Xylazine-tainted cocaine users have said they couldn’t understand why they were falling asleep since coke is a stimulant.

Buying illegal drugs has become extremely dangerous in recent years ever since Fentanyl started being mixed with other drugs. The addition of Xylazine has only increased the chances of a fatal overdose.

The deadly nature of today’s street drugs makes it more compelling than ever for people with a substance use disorder to seek addiction treatment.

How Does Addiction Treatment Work?

The first step in recovery from an addiction to opioids or other drugs that may contain xylazine is an inpatient detox program, which should be performed in a medically supervised environment.

Patients in some cases are given other prescription drugs that can help ease withdrawal symptoms, though it’s important that medical staff be on hand in case of serious health complications, such as a seizure or coma.

After the acute-withdrawal phase, the work of full recovery will begin with individual counseling, group therapy and, if appropriate, family therapy. All of these explore the underlying roots of addiction for each individual, and how his or her addictive behaviors can be changed.

Even though Xylazine is a different type of drug, a recovery program will follow a similar path to that of fentanyl addiction treatment.

Evidence-based rehab methods such as Cognitive Behavioral Therapy and similar treatment modalities have proven to be exceptionally effective in helping people manage and overcome triggers that lead to relapse.

Recovery from a substance use disorder can be challenging for anyone. But with drugs like Xylazine being added to the illegal drug supply across the country, addiction treatment may be the only way to survive and avoid a fatal overdose